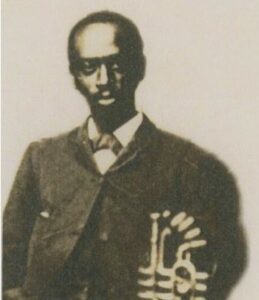 In 1832, Hoff blew the horn that summoned Lafayette’s first 43 students and three teachers to class. As a member of the Class of 1836, Hoff was the College’s first African American student. To put this into historical context, it was three years later, in 1835, that Oberlin Institute in Ohio became the first fully-integrated college.

Lafayette College was very different back then and was created following a manual labor school model. Every student helped pay for their tuition by either working in the fields or in light manufacturing.  Like his classmates, Aaron Hoff worked to pay his $30 per year tuition, cooking for students, and working to assist the first president, Dr. Junkin.  In addition to his coursework and labor, Hoff sounded the hours for rising, recitation, and dinner and he called students in from the fields with a horn that he zealously guarded until his death at age 94.

Although he withdrew from Lafayette as a student due to illness, he was still fond of the institution and returned in later years to work as a janitor, gardener, and coachman. During the college’s semi-centennial celebration in 1882, sounds of a horn were heard from the Chapel summoning the beginning of the festivities. As students, alumni, and faculty approached the chapel, they saw that it was Hoff, now 74, blowing the trumpet again.

Outside of Lafayette, Hoff, his wife, and his eight children were active in the Lutheran Church, and Mr. Hoff went on to be a founding member of the Colored Lutheran Church. Aaron Hoff was a well-respected citizen of Easton, a leader in his church, and to quote his obituary, “one of the ablest and better known colored men in this part of Pennsylvania.” While a student at Lafayette, he developed a close friendship with the College’s president, he was a member of the Washington Literary Society and an active member of the Easton community.

One hundred years after his passing, a group of six Lafayette students formed a Memorial Project Committee in order to give Mr. Hoff proper recognition and to raise money for a memorial stone to mark his previously unmarked grave. Designed by Professor Curlee Holton, the figure of a bronze horn player stands in quiet dignity over the black granite stone that now marks Hoff’s final resting place.

Although he never completed his degree at Lafayette, Aaron Hoff was granted an honorary degree in 2002, and by order of the Mayor of Easton, May 5th was declared “Aaron O. Hoff Day.” At the granting of this degree and the dedication ceremony of the new Hoff Memorial, he was also awarded Special Congressional Recognition for having let the way for other students of color and for his service to the College and the larger community.

Our Pulse Our People